When did you first become interested in boxing?. I was about 21 years old. I had my first fight against a Japanese boxer and won. I had done kick boxing which gave me an interest in martial arts. I was looking for something with a bit more challenge and started amateur boxing at Lakehaven Recreation Centre.

Who is your greatest boxing inspiration? Bernard Hopkins He's The Man. I also feel that Jamie Pittman is the next big Australian hope.

What do you see as the future for boxing on the Central Coast ? Keep rolling on. I hope to see more boxing matches happening cm the Coast so the profile of boxing can he lifted. We have a good lot of boxers in this area. Boxing isn't one of the more popular media sports, but some good results in Athens may see our profile lifted.

Would you allow your children to enter the boxing arena? I have 2 children, a boy and a girl Yes, if they were interested in the sport I wouldn't have a problem with it.

What has been your greatest moment! The birth of my children. And winning, the Australian Title back.

If you had one wish what would it be? To be able to box forever.

What sports are you interested in? I don't have time for other sports, but I do appreciate the efforts that go into all other sports.

How would you best like to be remembered? As a humble warrior that's always done his best.

What is the best thing about living on the Central Coast? Close enough to Sydney to enjoy the lifestyle there, but far enough away to have a different Lifestyle here.

Given your time again what would you change. And I'd  start boxing at a younger age. And I'd like another chance to fight Anthony Mundine 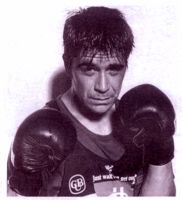