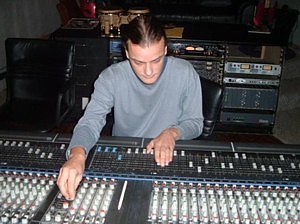 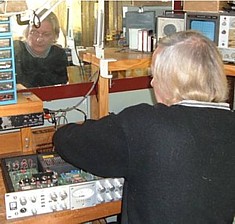 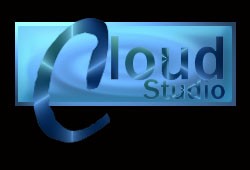 To observe the process which happens in a recording studio provides a huge learning curve for those not familiar with the process of mixing tracks ready for a marketable CD. It’s a revelation to watch the amount of effort that goes into just one part of one track. Those naïve to the process presume that the band plays the song, record their best version and voila, a CD is made. Nothing could be further from the truth. In this article we take a look at the men behind the music…. 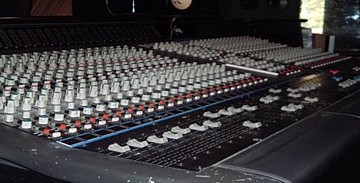 He is fascinating to watch. Focus should be on the machinery, but the man becomes a part of the visual experience – to the mind’s eye he and the controls are one and the same as his fingers slide the slides, twist the knobs, his arms reach wide and the chair slides his body effortlessly from side to side. His legs and feet represent a background beat, the movements of his head the twang of a guitar… his face intensely focused on a vast array of instruments he cannot see… he hears, he feels….. he is lost inside the booming sounds of the piece of music he is mixing. Every now and again a quick glide over to one of the computer screens, a flick, and back to the controls.

The whole experience is a sensory delight. As inspiring and mood-changing as any live performance.

And that’s just with a few 3 minute sessions….

Music. How many times in every day life do we hear the sounds of music? The radio on the way to work, standing in the queue at the shops, in the elevator, in cafes and restaurants and of course at home, either relaxing to a soft classical piece, appreciating a bit of the Blues with friends over a drink, doing the housework to an Irish jiggle to washing the car to the sounds of heavy metal!

Powerful. Music is a huge part of life we take for granted. A technique used throughout history from the earliest days of mankind to connect people, to soothe, to gather energy, to heal, to celebrate.

Technology has meant that music is available to every one of us at the push of a button. No need to make your own, no need to gather the tribe. So much a part of life today that rarely does anyone stop to think—how was this music created? How is this pleasure made available to us?

Put on your favourite CD. Listening to it, can you hear the beat of the drum? The piano solo at the beginning of the song? Listen closer. How many instruments can you hear? What sounds fade in and out? Ask yourself the question- how did all these sounds including vocals blend in so perfectly, not a note out of tune, not an instrument in the wrong place, everything perfectly synchronized to pleasing anyone’s musical ear? This is where a recording studio works it’s magic…

Meeting the owner of Cloud Studio, Parris Macleod and his team, it is obvious that they have a grand passion for what they do. More so, it would probably be fair to say “it’s in the blood”. Parris is the driving force behind Cloud Studios. He was brought up by a musical family in the UK, and is an accomplished musician in his own right.

That skill is a bonus which makes him an unusual asset in the music recording industry. His ability to judge what sounds appealing not just based on technical knowledge and an “ear” for music, but actual experience at creating the music in the first place.

Add to this the fact that team member Colin Abrahams is one of Australia’s most respected studio technicians with over 30 years experience in the industry and also an exceptionally talented Sound Engineer Shaun Cullerton, and artists have available to them world class advice and assistance respected by some huge names in the music industry. (We will be publishing separate articles on Colin and Shaun’s stories in future issues)

What is this “recording studio” like? What does it consist of?

It’s a hard thing for novices like ourselves to describe. Pictures will tell the story as will words, but neither replaces the experience of being there and hearing the work being created.

The studio consists of sound proof performance rooms—a shell within a shell, “live” sound is heightened by reflections from angled hard surfaces in one room while soft materials used in the second performance room absorb sound enhancing vocal recordings. Microphones and speakers are located throughout the rooms. A grand piano is situated in one room.

Then there is the hub, the control room. To the every day person, perhaps it should be called “the huge room with big dials, slides, lights, and computer and monitor things.”

The control room is where “magic” happens during and after the musicians have put down their tracks. The array of control dials that are utilized during the mixing would make a large centipede suffer from R.S.I.!!! Check the photos on the opposite page to see what we mean!

The equipment that is at Cloud matches the people skills—it is world class. 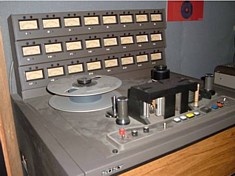 Analog Equipment - still used today
And the setting of Cloud Studios is unique. Set on 6 acres at Mardi, artists can choose to live on site while they are recording. A beautiful place for inspiration….
Site by Weblight Studio (Australia)

Back
Story and photography by Veronique Moseley and Ross Beckley