The museum has disabled access as well as ample parking. There is an on-site kiosk, barbecue area, souvenir shop and Mining Museum.

Trains operate on the first three Sundays of every month and the rides are free. 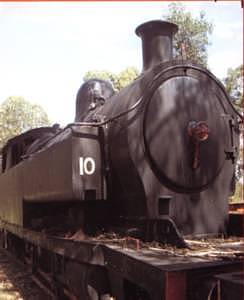 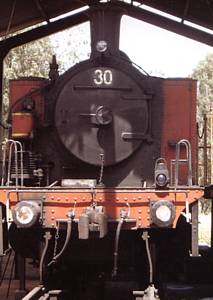 We arrived at the 40 acre property and Graham was nowhere to be seen. We found a couple of men working in a shed among multitudes of train carriages in various stages of repair. Graham, they said, was to be found behind one of the carriages outside. We found him engrossed in welding tracks. Oh yes, of course! Trains need tracks! Not to mention maintainance. And so began an insight into the fascinating world of old time steam trains and the enormous resources it takes to maintain these incredible machines.

Graham meets us with a grin and explains he has to finish a bit of welding. Too little time and too few volunteers means every man-hour is precious. Not that it worries him. Its a passion he shares with Wendy, his partner of 23 years as well as his son. This common interest has seen Graham and Wendy travel around the world "chasing steam". He has spent the last 15 years at Richmond Vale Railway Museum restoring old trains to their former glory. He is Vice Chairman of the Board and writes articles for the museum's monthly newsletter which Wendy edits. His amateur movies and videos about steam have found their way around the world.

A walking encyclopedia on anything to do with trains and steam, Graham starts to show us the engines and carriages in the shed. Some of them date back to the 1870s and take years to restore. It's difficult not to be fascinated. Looking at some of the carriages with their rotting timber, peeling paint, with interiors badly decayed you cant help feeling a sense of sadness that those pieces of history were left outside, abandoned. You develop a feeling of respect for those fellows who spend hundreds of hours as volunteers painstakingly performing the often tedious and arduous tasks to bring the carriages back to life.

Graham's passion for steam and trains is obvious and infectious. When asked about the average age of the volunteers working on the site Graham said " Ancient relics, like these blokes'" and he gestured to a couple of smiling volunteers he had just introduced us to. The museum has roughly 173 members but only 40 are active volunteers. Most are aged over 55. Too few are under 25! Graham became serious for a moment. " We need young people to learn the skills of restoration as well as driving the steam trains or we'll have no-one left to operate them!" 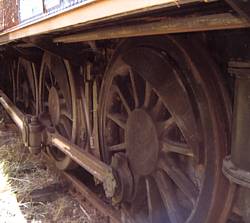 Women, the Future, Trains and You!

Dont young people want to drive trains? This railway is governed by the same regulations as the main line and the positions of guard, fireman and driver come under these regulations. Members have to be a guard before becoming a fireman, then a driver. A Technical and Further Education course in boiler management is required and all other training must be conducted by qualified members. It takes a minimum of two and a half years to become a steam driver. That is a lot to ask of volunteers.

Volunteers are needed for tasks ranging from mowing the 40 acre site to scrubbing the trains before their runs. Specific trade skills such as woodworkers are also needed. There is nothing stopping women becoming guards or drivers. Wendy Black is Australia's first female qualified for a non-air train.