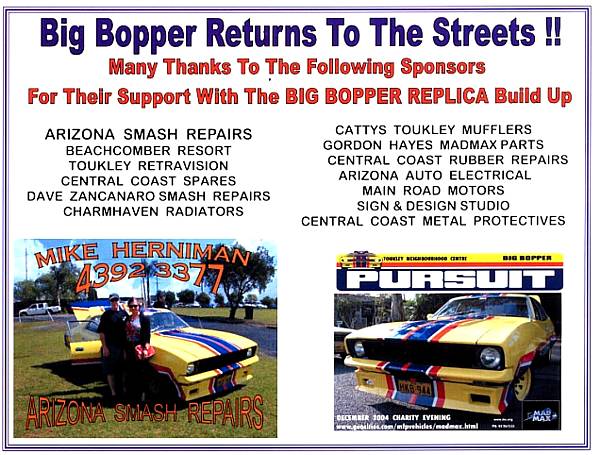 The Central Coast Community has rallied together to create a Central Coast first - a community built replica of one of the cars from the movie Mad Max - Big Bopper.

In the movie Big Bopper was one of the Pursuit Cars which were driven by Charlie and Roop. Hugh Keyes Burne, who played the Toecutter in the movie, is one of the main supporters of the fundraising events. Interestingly, the base car, a 1975 Ford Falcon sedan which was purchased some months ago bears his intials on the numberplate (HKB). Another co-incidence is that after much searching the car was available for sale in the street behind the Neighbourhood Centre.

The brain-child of Veronique Moseley and Ross Beckley this is a huge undertaking with enormous support. From John McGuffie in the United Kingdom and Tim Ridge in Queensland as technical advisors, as well as our own local advisor Mark Kemp who is building his own replica of the Black Interceptor and Gordon Hayes in West Australia who supplied fibreglass body mouldings at cost. These are direct copies of the ones originally supplied to the movie makers back in 1979