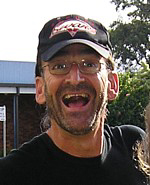 What has been your most embarrassing moment?

Age 10-11, playing a poor but honest Chinaman in a cut-out sampan. Managed to trip on the mast-roap as I leapt out to rescue the baby floating by in the basket. Opening night! Cameras rolling! 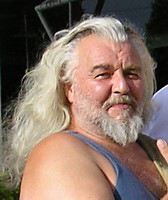 If you were an animal what would it be?

What has been the greatest change in your lifetime?

My son Sachin aged six and a half..

Inspiration? Inspiration to keep going? Me. I am my own personal trainer. I push myself to the limit and feel that if a normal human being had as many knockbacks and career challenges as me they'd curl up and die. But I keep coming. I am 92 years old and still determined to make it...as a leading man!

Inspiration as far as my work? Originally it was Marlon Brando. I think every young actor at the time (my time) looked up to Brando. I had the pleasure of meeting him and becoming an aquaintance while in Tahiti in the early '60s. Brando was my international actor inspiration.

As far as making it in Australia and adapting to the new-fangled style of acting that television offered (I had done radio and stage and a bit of extra work) I couldn't go past Ed Deveraux and Michael Pate. I was working in television and doing okay but I knew something was missing. I happened to work on a few televised ABC plays with Ed Deveraux and improved a lot. Then I had the pleasure of working with Michael Pate on a show called Matlock. Initially I had the shits with Micheal because I was up for the part that Micheal made his own.

I had been through the audition process, had tested other actors to work opposite me when Michael who was producer at Channel 7 at the time offered Crawford Productions his service. Obviously they grabbed him. Then they threw this dog a bone. Gave me a few guest leads and of course I worked opposite Michael. He had a relaxed, laid-back style (so laid-back he would watch himself on monitor as he worked) Man, that was educational! His pace, his attitudes, his movement. I learned so much from MIchael. And he's not just an actor. He's a writer, a producer, director, entrepreneur. All of the things I aimed for as well.

Better to have loved and lost than never loved at all.

Aim for the sun and if you get to the moon you have done well.

What are your favourite quotations?

We are such stuff as dreams are made on, and our little life is rounded up with a sleep. (Tempest)

Time hath a wallet at it's back.

What has been the greatest change in your lifetime?

The widening of the gap twixt rich and poor!

Who is your greatest friend and why?

Christina, my partner, she doesn't blame

Who has been your greatest inspiration. 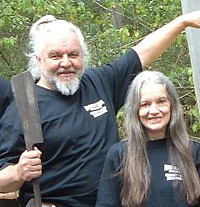 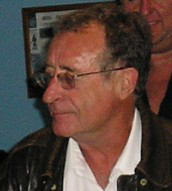 In the movie industry... George Miller because he has a way of working and editing that captures the human psyche

Who are your best friends?

My three sons. A bond in blood will never be replaced 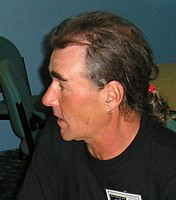 Who is your best friend?

Craig Rumble who loves motorbikes as much as I do... and Dinki, my dog who loves fishing with me on the boat and carries the live fish home for me!

You're none too clever.

What do you feel has been the greatest change in your lifetime?

The wheel I guess... Then the motor car, then that thing called flying.

No, I guess it was the day Jayashree came into my life 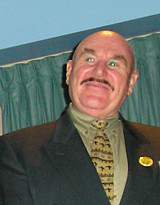 I had been married and had two wonderful kids but I'd always been a gypsy and adventurer, a traveller. I earnt big and spent big! Then Jay came along, a beautiful girl from India, only here a week or two.

She was a journalist doing a story on Australian aboriginals. I happened to meet her and chased her all the way to Bombay. We were married within weeks. She anchored me, made me settle.

My life has changed dramatically since meeting Jay. For the better, of course! 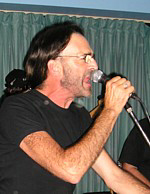 What do you feel has been the greatest change in your lifetime?

Fatherhood at 39. The only time in my life where long-held and high expectations weren't just met, they were supremely surpassed and continue to be.